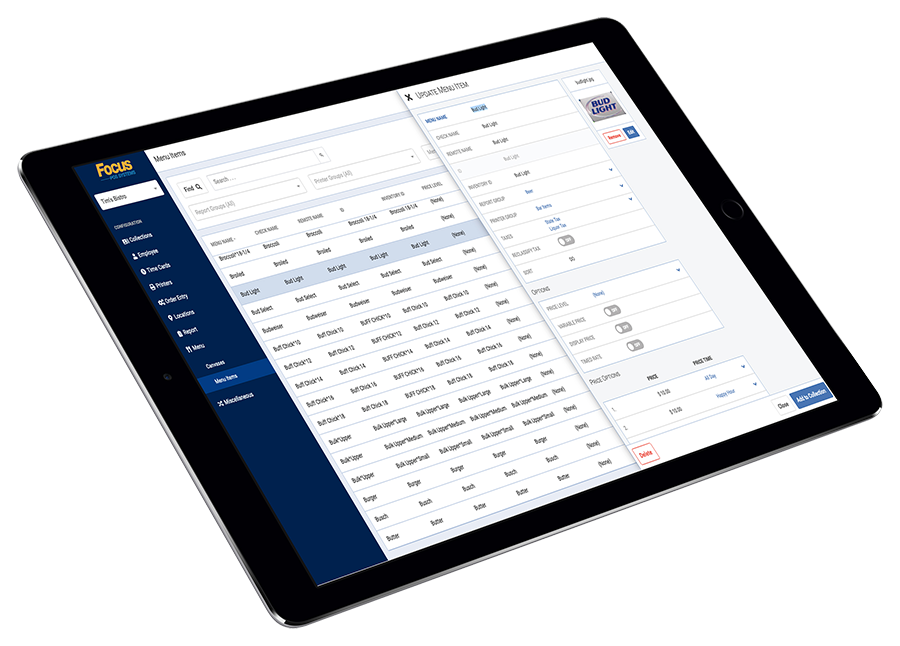 Adding a new menu item and menu file maintence is one of the easiest things to do within Focus POS. If you have any questions or need assistance, please do not hesitate to call our office at 505-293-7551.

To add a menu item, head to the Backoffice section of the Focus POS. On the top tool bar, press Menu > Menu Items.

The 1-7 sections to adding a menu item will walk you through adding your new menu item.

Last step is to assign the menu item a destination. For an automatic canvas, select AUTO CANVAS on the top bar and check mark which canvas the menu item belongs. For a manual canvas, go into CANVASES in the main back office section.

Once completed, press SAVE.

For more in depth information, please refer to the Focus POS manual. 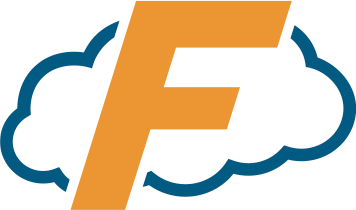 This error occurs when the Main Computer / Server named Focus cannot be found on the network.

If Message is on ALL terminals:

If Message appears on one / multiple terminals but not ALL:

The red bar indicates the Focus terminal cannot see or back data up properly to the Backup terminal.

Credit Cards Not Processing (Via Swipe)

Note: This will not work for EMV

Check the internet connection by pressing going to the Log In screen and pressing the time clock in the right hand corner. The About screen will appear and press the tab labelled “Internet”. Press PING at the bottom left of the screen.

New ruling sets the stage for credit card surcharging in all fifty states.

The national trend of merchants passing on their credit card fees continues to accelerate, aided last week by a federal court striking down Texas’s “no-surcharge” law as unconstitutional.

The Texas ruling follows the defeat of no-surcharge laws in Florida and California, but it is a unique milestone: Texas is the first state in which a surcharge ban that was previously upheld has now been struck down under last year’s Supreme Court precedent in Expressions Hair Design.

Now businesses in all states can benefit from including the merchant service fees on transactions.  What can you do with an additional four or five percent on your bottom line?

NM-POS can set up all of our products to collect electronic funding fees automatically.  Unfortunately First Data Corp.’s Clover Unit removed this ability from their App putting their merchants in the hole regarding this ruling.

A recent analysis by industry experts confirms, “When cardholders bear the cost of their own rewards, they are motivated to choose a lower-cost option.”

Our flagship product, Focus POS, has introduced a Wait List feature in their newest point of sale software version 18.3.8. This built from the ground up feature can have your host/hostesses retain valuable information such as party size, preferred table type, seating location, custom special notes, time quotes, and much more! This function can be utilized by any staff member at any station, including iPad / Tablet point of sale workstations! To make it even better, this feature comes with the stock software with no additional costs!

NM-POS has a demo system in our showroom.  Schedule a demonstration and see how QSR Automation can move your kitchen up the professional ladder to super stardom.

As a tech, why Focus POS is the best.

First, Focus POS has no Microsoft Windows installation. It is one folder residing in the root directory of the hard drive and has one executable program. Simple!

Second, Focus POS has no Window’s VXDs, DLLs or any other complexity and Focus POS never touches the Windows operating system. Brilliant!

Third, Focus POS is logical. Installation after installation servers, bartenders and managers tell us Focus POS is the easiest and best point-of-sale system they have ever used. Our twenty years of installation experience insure owner operators painless trouble free POS investment. As a tech, Focus POS is a snap without stress.

I could go on and on about how good Focus POS is to a tech. Here is the bottom line; Focus POS runs like a tank. Day in day out, weekly, monthly, yearly for decades Focus POS runs. That’s what I like about Focus POS as a tech.

Focus POS has set a new standard of value in the restaurant POS industry. Performance and features cheesy cloud tablet systems can’t touch. Full size 15″ color touch POS workstation that includes: touch screen, mag card reader, printer and the best software in the industry ‘Focus POS’. All this for under two thousand dollars and no hideous monthly usage fees. Couple this with New Mexico POS providing all system database programming. installation and our outstanding full year of on-site warranty service and full year free system support. THERE IS NO BETTER VALUE IN NEW MEXICO FOR A POS SYSTEM!

This is exciting – call for a demo today and see why Focus Byte technology is the best value in the Point of sale industry.

Focus POS can’t help that! Good God woman; did you bathe in perfume?

Restaurant owners establish rules and regulations for the performance of their staff. Rules that enforce performance which directly affect their customer’s dining experience and regulations that control behavior within the service team to produce a cohesive, productive and beneficial workforce for everyone in the restaurant. Focus POS has advanced features that control the guest check, production of food and beverage then insures accurate payment controls for payment. Focus POS can’t stop a waitress from bathing in perfume and fouling the air when serving tables, only management can do that.

Point is; the point-of-sale system has it’s job to do and management has their job to do. Both can be weak or strong. New Mexico POS provides the strongest point-of-sale system in the industry, ‘Focus POS’. Since 1997 Focus POS has produced the most reliable system in the industry and through the years has continually enhanced it to produce the most feature rich product available.

Over the last five years more than two hundred cloud and non-cloud restaurant POS systems have been introduced on iPad, Android and other weak kneed platforms. All vying for your point-of-sale dollars. Hideous reliability, hideous feature sets and in all reality much more expensive and less value than Focus POS.

Stop fouling the air with cheesy unreliable point-of-sale systems. Focus POS has got your back. Quality and reliability day in and day out, year after year.

What an incredible solution for point-of-sale.  Imagine a 10″ true-flat screen color touch ePOS workstation that starts instantly, has no complicated Windows Operating System, never slows down in speed and provides simple inventory for up to 50,000 items without an expensive PC software!  The incredible Uniwell HX-1500 is the long-term solution retailers and restaurateurs can count on day in and day out, year in and out.  Reliable performance and easy setup are the hallmark of the HX-1500.  Best of all the Uniwell HX-1500 is not a cloud based iPad system with expensive monthly fees.  You own your system and data.

Check out the impressive features: 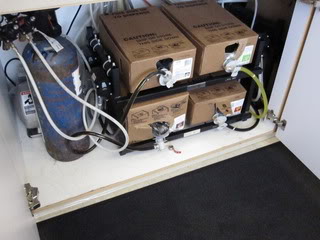